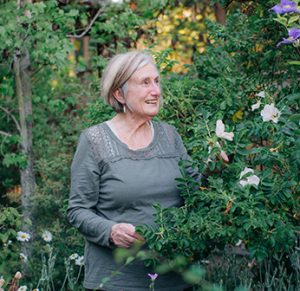 Maureen Coe watched her community and local hospital grow over the last 20 years.  As a parent, grandparent and active community member she doesn’t sit still for very long, so when hip pain turned into lower back pain and began to affect her mobility it was time to act. Jefferson Healthcare was her choice.

After hip surgery in the Seattle area a year earlier, Maureen met with Dr. Naumann, an orthopedic surgeon at Jefferson Healthcare, to discuss options for her other hip.  She knew if she was going to have surgery again, she wanted to be close to home.  Dr. Naumann was thorough in his explanation of the surgery and rehabilitation.  He gave her time to ask questions and addressed her concerns. Maureen was more than satisfied with the answers she received and felt comfortable with the care she was promised.  Hip replacement surgery was performed in November 2018. By December she was up, walking and shopping with her family on Water Street.

To have the surgery performed at Jefferson Healthcare and recuperate at home made it much easier for Maureen and her family. She spent a few days at Jefferson Healthcare and was amazed by the attention the staff gave to care for her.  “It was just so friendly here, we were so impressed.  Dr. Naumann was so patient explaining how the surgery went and what I could expect after.  I was a real person, not just another patient.  My kids noticed a difference in the care as well,” said Maureen.

Trudy Warriner had a similar experience with the Orthopedic team when she had knee replacement surgery in March.  Trudy suffered from arthritis in her knee and wore a knee brace for over 15 years.  She consulted with many surgeons over the years but never met one who provided the confidence in care she wanted for such a significant surgery.

Dr. Naumann explained step by step the processes for her surgery and aftercare.  “He showed me how he would measure my knee, so everything was exact.  He was friendly and positive when he talked to me.  I wasn’t just another patient to him; every other time I talked to a doctor about my knees I didn’t feel like I mattered that much. It was always such a negative experience,” said Trudy.

Both Maureen and Trudy came to points in their life when their mobility was impaired and their day to day activities exceeded tolerable levels of pain.  Maureen relied on a cane for basic functions and Trudy spent 15 years in a knee brace for added support.  Each was pleased to have an Orthopedic team who cared about them throughout the entire process.  They appreciated the local, high-quality care they received at Jefferson Healthcare.

Today, Maureen has graduated from physical therapy and walks three miles a day.  She is a long way from the pain she endured in her hips and lower back.

Trudy is wrapping up her physical therapy with Jefferson Healthcare Rehabilitation.  She walks a mile and a half a day with the goal of reaching three miles a day before much longer.  “I have to”, she says “I have my dog and my nine grandkids I have to keep up with.  That’s my motivation.”